Meeting goals that I didn't even know I had 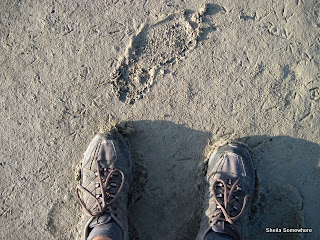 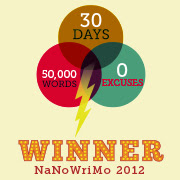 These two photos have something in common: they both represent things that a year ago I would have said would never, ever have anything at all to do with me. I did two things last month that were scary and exhilarating and totally unexpected and now I'm going to brag about them, so now is probably a good time to stop reading.
The tennis shoes ("tennies", "trainers", "sneakers", "takkies", "athletic shoes", and who know how many other words there might be...) were bought by me, for me, when we were in Germany in April, and are the first tennies I've owned in at least ten years, which is why when Lukas saw me wearing them, two months before he turned ten, he told me I looked like Grandma. (A compliment to me, not to my mother, who is 20 years older than I am but considerably more active and fit and has run three marathons in the last few years. She probably goes through more pairs of tennis shoes in a year than I have in my entire life so far.) In addition to buying these tennies, I actually started wearing them when we got back home to Cyprus. I went out walking in the Salt Lake park near our house two or three times at the end of April and beginning of May, and as of May 18th, have been out every single day since, except for 11 days in July/August when I was in Germany, one day in September when I overslept, and two days in October while my husband was out of town. Some mornings I've gotten a late start and only had time for two or three kilometers, but most mornings I go at least four and often eight kilometers (plus the 300ish meters each way to and from the trail), since the nature path along part of the Salt Lake is four kilometers long.
Aaaanyway, when I first started walking, it not only took me 45 minutes to go four kilometers, my heartbeat got up to 200 beats per minute while walking and I was worn out for the day. That kind of scared me--I knew I was out of shape, but not that I was THAT out of shape. Happily, that did change pretty quickly, so that within just a couple of weeks I was having to make an effort to walk fast enough to even get it up to 120. (No, I don't know what my ideal target heartrate would be, and Google wasn't much help, either. But I do know that 200 is way, way too high.)
Within less than a month I'd actually started jogging a tiny bit, just a few hundred meters at a time. That was the first thing that I thought I would never, ever do, and then in the middle of August (AUGUST! In CYPRUS!!) I jogged the entire eight kilometers without stopping. At a speed that would make real runners chuckle with amusement, but I was pleased. And then on November 4th, I participated in the 16th Annual Larnaka International Run, a free six-kilometer race along the sea front. While I thought of it as a "fun run", it was quickly obvious that I was the only person there not really taking it seriously. I had three goals for the run, and met them all: to complete it all, to jog the whole way, and to do it in under 42 minutes. The winners were finished in about 20 minutes, and the judges and timers had long since disappeared by the time I finished at 40 minutes 35 and a half seconds (according to the stopwatch on my cell phone), but I was thrilled. (In fact, I was giddy and hyper and totally crazy with excitement, and I love my friends who instead of laughing at me, cheered me on and laughed WITH me. It was so cool.) So, that was the long version of what the photo of my muddy tennis shoes represents.
The other photo, downloaded from the NaNoWriMo site, is because Marie and I participated in National Novel Writing Month this year. The goal is to write a complete work of fiction of at least 50,000 words during the month of November, and I really don't know what made me sign up (well, I could partly blame a Facebook/internet/homeschooling friend of mine--you know who you are, D MG!), much less then actually TELL anyone about it, and then Marie signed up, and my friend Sue, and Marie's friend Charis, and...we DID IT! On Saturday, December 1st, the four of us went out for ice cream to celebrate over 200,000 words in 30 days, very pleased with ourselves. I've always loved writing, but rarely even manage to actually finish even short stories, and had never attempted anything like this before. My story (I really can't bring myself to call it a "book", much less a "novel") is fairly silly and not very coherent, but it was a ton of fun writing it. And that is the short version of why I only blogged once in November.
Posted by Sheila at 8:22 PM 3 comments: