Really, this should TOTALLY be finished by now. It's not. But maybe, just maybe, the "plumbing" part is. Maybe.

Several times since my last post, I was going to update that everything was fine now...but by the time I got to the computer, something else was leaking. I think everything is fine now, but I'm not holding my breath.

It already feels like it's been a lot longer than three weeks since this all started, but that is all it's been. Three weeks ago today was the day the plumbers were supposed to start work, three weeks ago tomorrow is the day they actually did. And my last post was about February 19th, which is already two weeks ago, and everything should have been finished by then. But it wasn't.

That evening, the toilet was rather wobbly, and there appeared to be water leaking from underneath. I had lost every bit of patience with Mr. George's plumbers, so I tried phoning Barry, an English plumber recommended by Richard. When he didn't answer, I texted, and eventually got a response back, that he was in England. So then I texted my friend Mary and asked if her extremely practical husband, Ken, was bored and wanted to fix up botched-up plumbing jobs. He showed up Wednesday morning (February 20th) and had a look at everything. He wasn't too impressed with their method of fixing the toilet down: lots of silicon, and nothing else. So he first of all took it off, then tried to figure out where it was leaking. 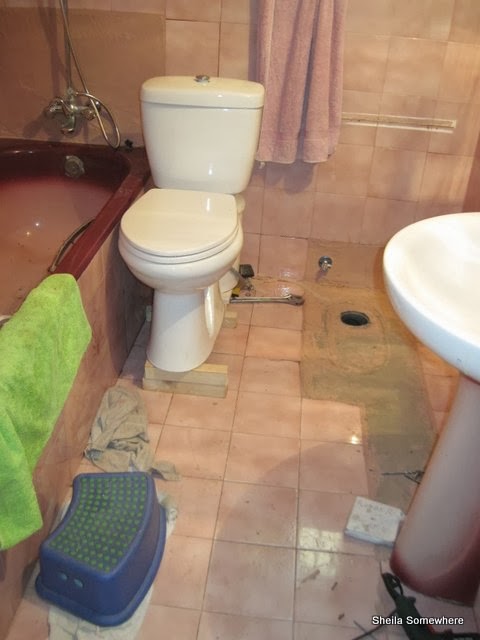 Nothing seemed to be leaking at this point, so I decided maybe it was just spilled water and my paranoia, and he drilled holes to fasten the toilet down with screws...and hit the hot water pipe, which ran directly under where one would normally put screws. Maybe the original plumbers knew that, and that's why they didn't fasten it down? Nah, I doubt that they thought that far. Anyway, after a lot of fiddling around, Ken repaired that leak, fastened the toilet down, and moved to the next job: connecting the dishwasher.

Not that we use the dishwasher (a totally different topic, and I think I may have even said that before...), but several years ago, we DID pay 70 Euros to have a major hole drilled from outside to inside and have the dishwasher connected. (It's outside, on the kitchen terrace, connected to the water supply in the laundry/shower room.) And we might use it again some day, or get another dishwasher, or whatever. The point was, the plumbers had not returned it to it's original, useable state. As far as Ken could tell, they'd melted a not-very-round hole into the drainage pipe, stuck the drainage hose from the dishwasher into it, and covered it with silicon. When it leaked, they put a whole bunch more silicon on it, up to an inch thick. So the first thing Ken did was take the drainage hose out and repair the pipe: 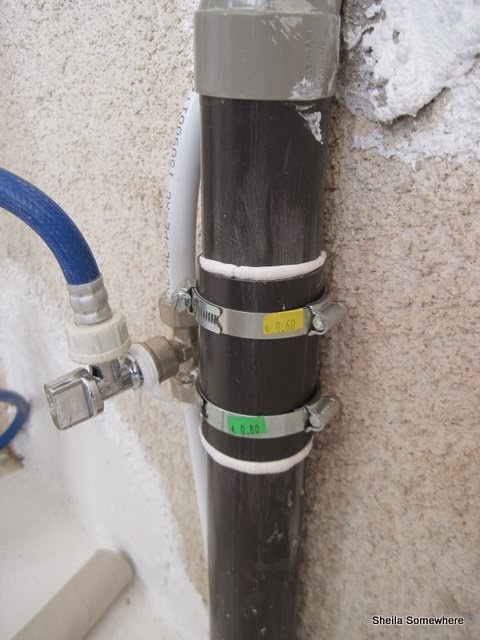 In the meantime, there had of course been more communication with Mr. George, and on Friday, the 21st, he and someone else came by to look at everything, in particular to discuss how to cover the floors in the bathroom, laundry/shower room, and kitchen terrace. While they were there, and we were all standing in the bathroom, Lukas pointed out that the bathtub tap was quite crooked. 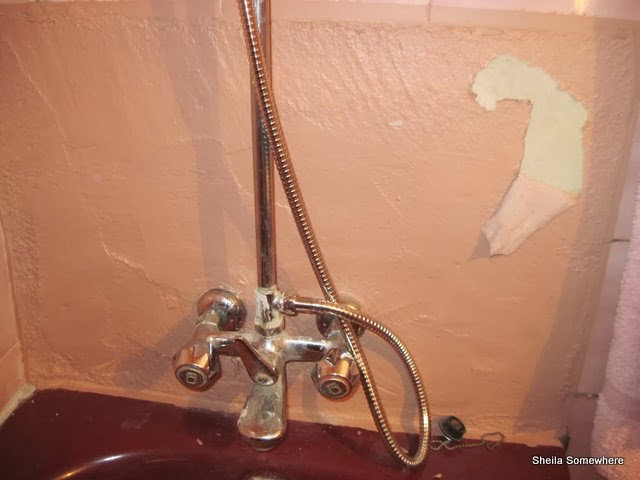 I said that that really didn't matter, and that Lukas should stop interrupting, but Mr. George only picked up on something being said about that tap and asked if it was leaking. I said, "No...oh, actually, I don't know, I haven't even checked." Because of the wet paint on the wall, even the little girls had all had showers, not baths. So I tried to turn the tap on...and water came out when I turned the right-hand faucet, but not when I turned the left-hand one. Here's a close-up of their brilliant job: 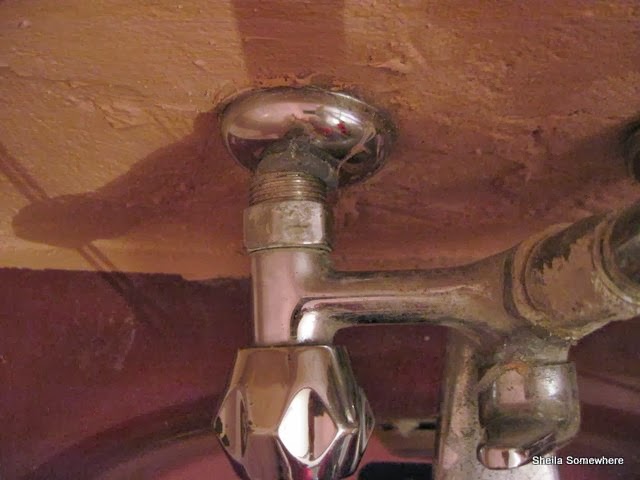 Mr. George said plumbers would come on Saturday, the 22nd. They didn't. (This is getting rather repetitive...)

However, Ken did, and he is really wonderful at explaining things to children (Lukas in particular) who hang around and ask lots of questions: 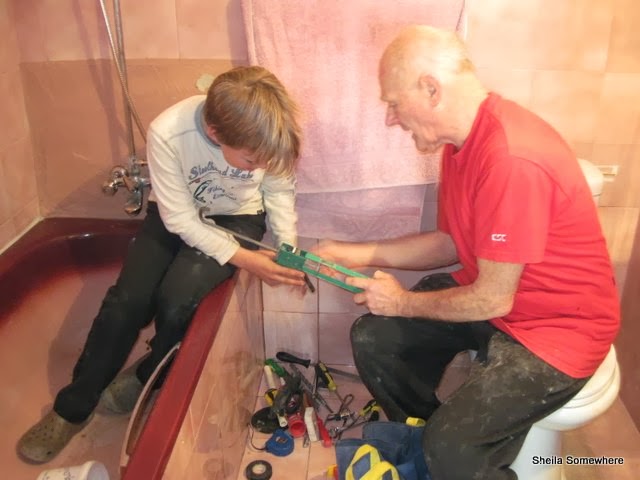 One thing we discovered while Ken was there was that in the original repairs, the plumbers had switched the hot and cold water around! Not that it really matters, and normally, cold IS on the right and hot on the left, so now it's standard. Although the fixture is something rather less than standard. In any case, water was now running through it, so we left it.

What Ken did do was then put on an appropriate way to drain the dishwasher: 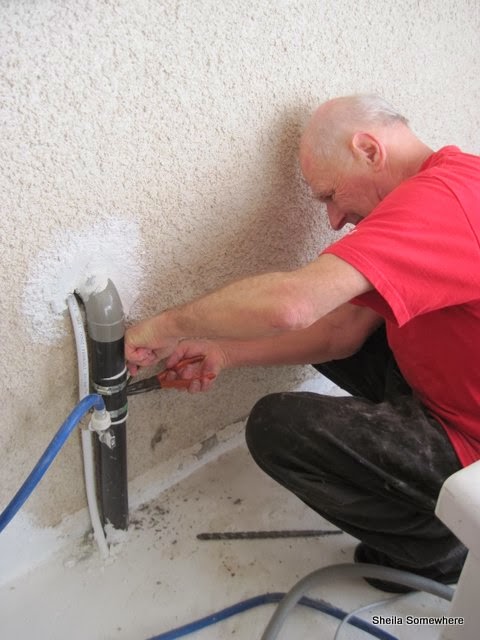 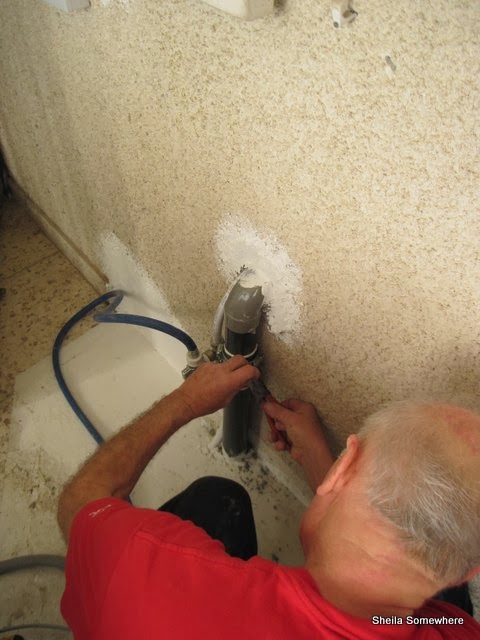 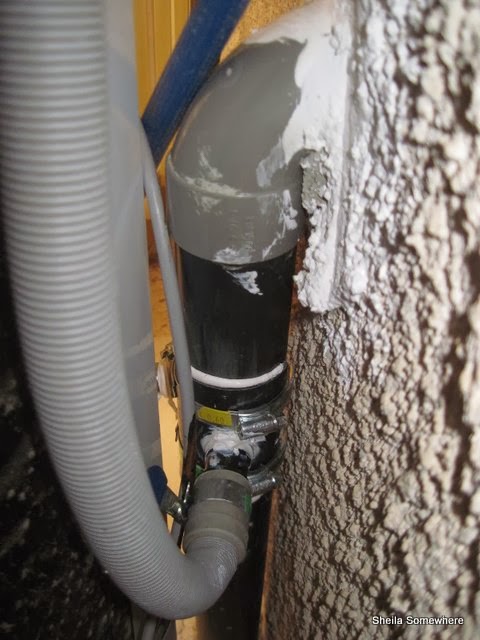 Not the most standard or most elegant, but at least working.

He also let me take a photo of him as he was leaving and gave me permission to post it: 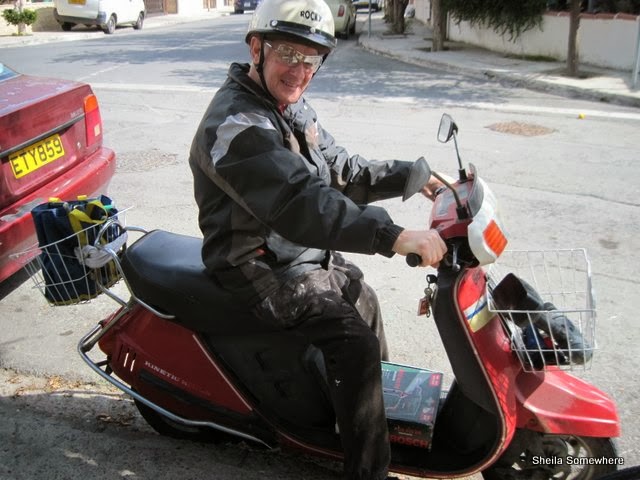 However...by Sunday, there was a LOT of water leaking from under the toilet, definitely coming from there, and dripping downstairs through the ceiling again, too. I turned off the hot water, and it was less, and on Monday (February 24th)  I texted Barry, knowing that he was getting back from the U.K. that night, asking him to phone me if at all possible as soon as he got back. He did so around 9:30 that night, Tuesday he came and looked at everything, and on Wednesday he arrived at 9:30 and worked for four hours. (Incidentally, I'd had several phone calls and text exchanges with Mr. George over the weekend and at the beginning of the week, and on Tuesday, he said that his plumbers would come on Wednesday. We said no, we didn't trust them, and he finally said okay, if they weren't there by "8:00 or so", then our plumber could start work. Jörn was a bit concerned about how we would handle it if Mr. George's plumbers DID show up, but not at all to our surprise, they didn't, so there was no issue.)
In the meantime, Ken had also come and taken the cistern off the toilet, but said he had no further ideas, so at this point we had no hot water, and were flushing the toilet with a bucket. Which I am absolutely totally fine with when camping or when living in a place where that is the norm...but I do find it a little annoying when living in Europe (even if it's the Middle Eastern end of Europe), where all the modern conveniences are standard, and where I am paying market rent.
Barry took the toilet off again, and determined that there was ANOTHER leak under the one which Ken had made drilling a hole, and the repair hadn't held. So really, it was good that Ken had caused a bigger leak when trying to fix the toilet to the floor, because the other leak was so much smaller that it could have gone a long time without being noticed. (I don't remember any more which one was hot water and which one was cold water.)﻿ 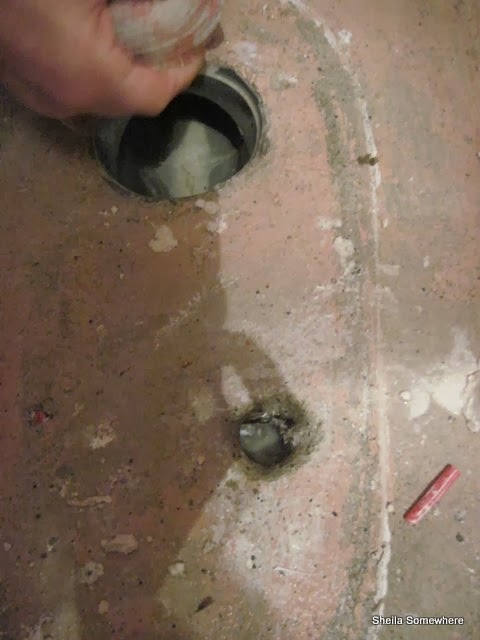 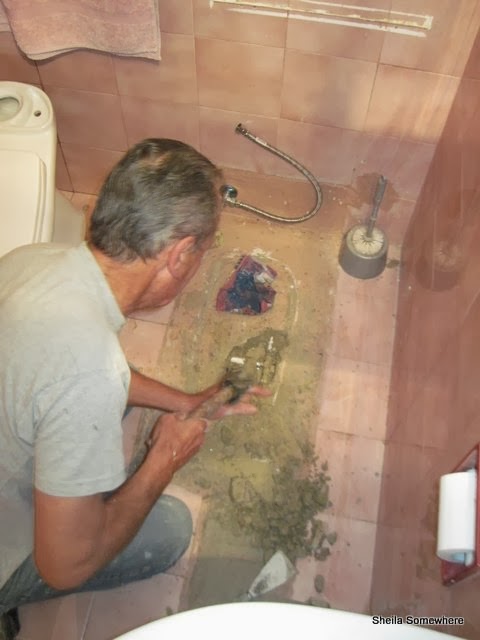 Finally, everything was put back together, AND Barry cleaned up after himself. 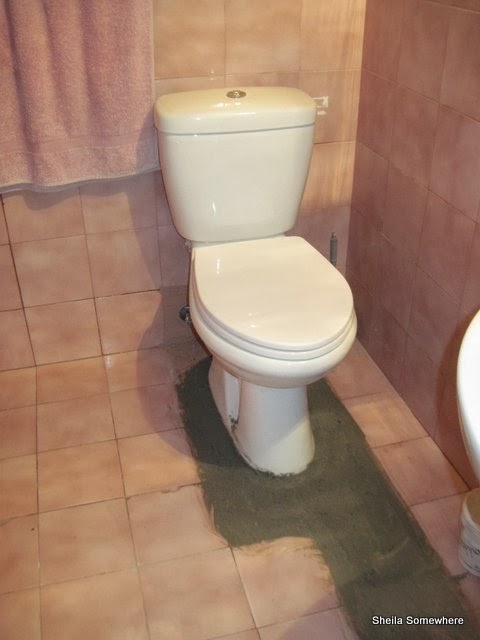 The toilet still isn't bolted or screwed to the floor--it's now fastened to the floor with cement. That doesn't seem ideal to me, but it's been five days now, and it's not wobbling even a tiny bit, so that's certainly better than what we had before!

We decided that the faucet in the bathtub wasn't ideal, but nothing really needed to be done, but he did switch the blue and red rings. I'm still not sure if we should use the bathtub, with all the paint peeling off of the wall... 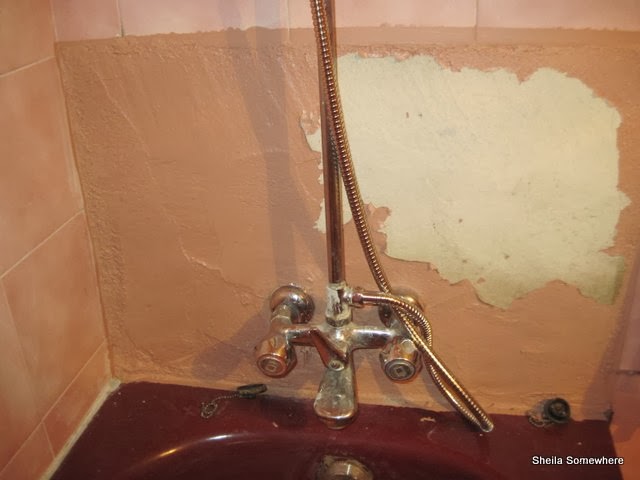 And when I asked Barry about the pipe outside, he said, "Oh, I already did that." I hadn't even noticed. He said that yes, the correct part is more expensive than the part they had used, 6 Euros rather than about 3 Euros, but that it's a pretty stupid thing to attempt to economize on. 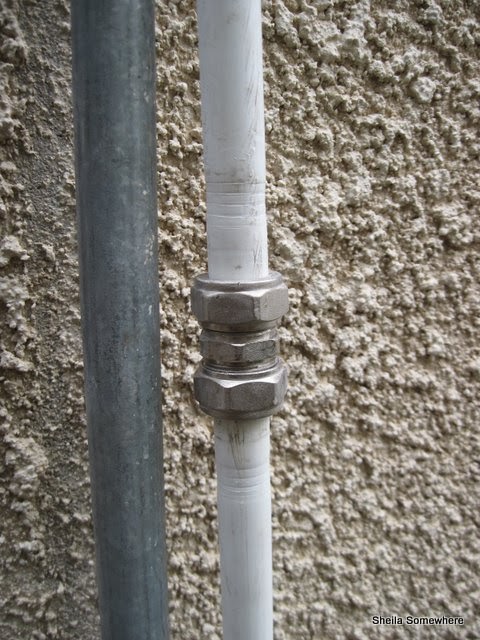 Once Barry had left, I texted Mr. George that it had been done, and that we would take the 150 Euros out of next month's rent. Not that we've paid this month's rent yet, nor do we intend to until the floors are taken care of. They've talked about putting "something plastic" (I'm guessing linoleum?) down, but I'm rather nervous about what kind of a botched job they'd do with that.

I was finally going to get around to blogging all of this on Sunday...when we found water all around the toilet again. I dried it all up and locked the bathroom door from the outside, so that we could determine if it was connected to anything in the bathroom actually being used, and when I checked later, there was a lot of water on the floor. So I turned off both the cold and hot water to the house, dried it all up again, and kept watching it. More water appeared, but considerably less, and it eventually stopped. So all day yesterday we flushed the toilet with buckets of mains water carried from the kitchen, and washed hands and brushed teeth in the kitchen. I did text Barry, but didn't phone him, as it was still early-ish, and then I decided to wait until today, to see if I could determine at least whether it was cold water, hot water, drainage water, or the toilet itself leaking. It at least wasn't drainage from the toilet, which was certainly good!

This morning I turned off the water supply to the toilet and turned only the hot water on: no leaks. An hour or so later, I turned on the cold water: no leaks. After another couple of hours, I turned on the water to the toilet, and discovered the problem: a leak from the cistern itself. It's in a totally awkward place to try to see, but feeling around, there was some kind of screw or nut that was loose, so I tightened that, which made the dripping less.

At this moment, the water to the toilet is still turned off. Because of the wet paint (yes, WET paint, that was applied nearly THREE WEEKS AGO...it did dry, but every time it gets wet, it's possible to rub off the color again, so it's certainly not waterproof, and obviously not appropriate for a bathroom floor!), I can't dry the area completely, so I'm waiting until it has air-dried to turn the water supply to the toilet back on, so I can tell if I tightened whatever that was enough.
Posted by Sheila at 2:57 PM 1 comment: