I hear that fewer and fewer people read blogs, but I still do. One that I read regularly is about ex-pats, written by ex-pats, all over the world. Single and married, with and without children, homeschooling or public schooling or private schooling, Christians, non-Christians, temporarily where they are, permanently where they are, speaking the local language or not, multi-language families or not, etc. A large majority are originally from the U.S., some are not. In October they ran a feature called "This Global Home," with a post each day from a different country, introducing the houses. I haven't actually finished reading them yet, although nearly--I've read 22 of them, I think.

One of the early ones had a phrase which then recurred several times over the month: "Keepin' it real." The photo with that statement was of a bedroom with a toddler in it. The toddler was sitting on the floor, and there were several things on the floor. A teddy bear, a book, a pair of shoes. Or something like that. Definitely not more than three or four items, anyway. The author said something like, "Keepin' it real, folks--impossible to keep everything cleared up with children in the house."

Personally, I would have considered that bedroom sparkling clean and completely tidy. Never in my life has any room of any house I have ever lived in looked anywhere that close to an Ikea display room.

I've been wanting to blog for MONTHS about our move. I've wanted everything to be finished, so I could write a nice concise (yeah, right) post about the process of our room being built, moving in, and finally living here. Photos of boxes everywhere, then photos of no boxes. Photos of the roof with spray paint marking where walls would go, then photos of the frame going up, then the finished room.

The four younger children and Joern and I were in the mountains for a few days when Jacob actually got started, August 27th. This is our room when we got back September 1st. Keepin' it real, folks, keepin' it real: 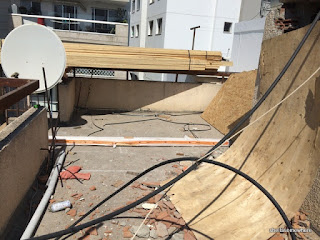 The place where a door was supposed to go turned out to have rebar in it... 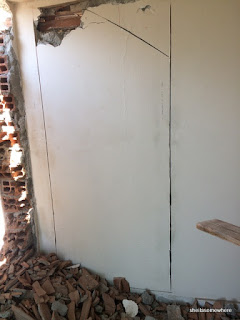 ...so here is our doorway, which also made the room several square meters larger. 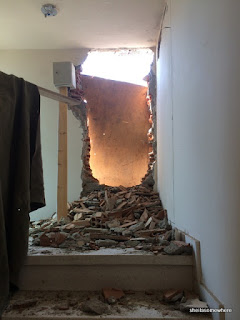 A week later, with the rubble finally removed: 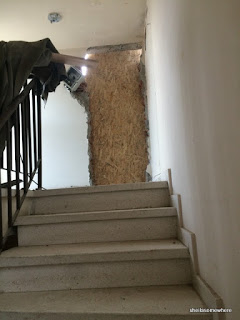 ...and our room, looking rather more cleaned up: 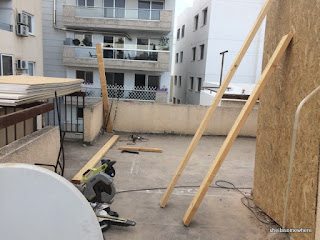 The materials that would eventually become our room: 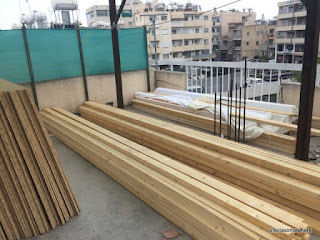 The whole getting-the-house process was ridiculously long, for reasons having nothing to do with us (well, unless one counts the fact that our insistence on honesty did slow things down a bit...): we put in the first offer in April, which was turned down, then after meeting with another bank, put in an offer on May 9th, which was accepted. August 10th the deposit was paid and the first contract signed, and we got keys the next week. (The owner still had keys, and was coming and going, watering the garden ("yard" in American English), feeding a cat, and phoning us every time she thought we hadn't closed enough shutters or turned the key enough times.) August 27th, Jacob started work on the roof, building a fourth bedroom. And September 6th we finally paid the balance (well, the bank did) and got all the keys. (And stopped closing all the shutters every time we left the house for ten minutes.) Four months.

We "moved in" (in that we slept here for the first time) September 26th, but our bedroom was nowhere near finished. Lukas, however, was in England from September 8th until October 30th, so we were able to stay in his room.

We moved into our room October 30th, while Lukas was literally in the air on his way back from England. 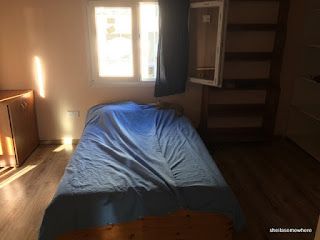 And I'm pretty sure he'd already actually landed by the time I had his bed put together in his room: 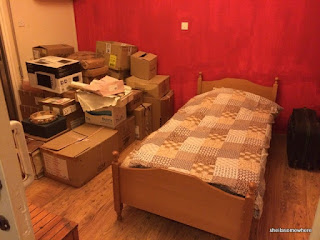 Those boxes, by the way, are all ours. Everything of Lukas's, with the exception of one large painting, fit into one of the closets in his room. (Oh, except for the stuff he has stored at Jacob's workshop/warehouse...)

And I take no responsibility for the color--Lukas painted that before he left for England. 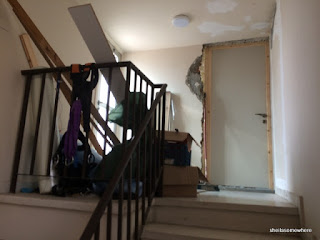 I have plans for that landing, for a desk and my very own space for the first time in 24 years, but the wall isn't finished and Jacob still has a ton of stuff there. 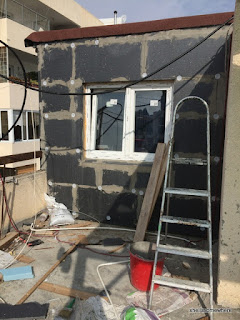 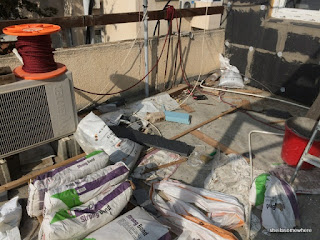 A friend has told me several times that she admires my patience. I had to tell her a story about Elisabeth, three years ago. We were in the U.S. and five-and-a-half-year-old Elisabeth tried to talk to my sister, Erin, while Erin was talking to me. Erin asked her to wait for a moment, and after she (Erin) had finished, she turned to Elisabeth and said, "Thank you for being so patient. What would you like to say?"

Elisabeth said very firmly, "I was NOT patient. I was just QUIET."

I never had much in the way of patience, and I'm running out of quiet.
Posted by Sheila at 11:32 PM No comments: